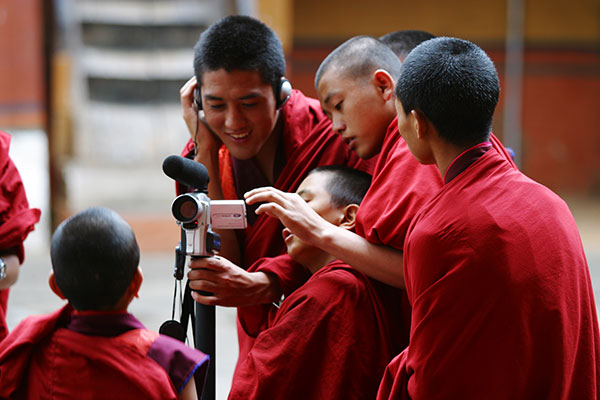 People in Bhutan can be divided in three broad ethnics group – Sharchops, Ngalops and Lhotshampas.

The Sharchops who live in the eastern regions of Bhutan are considered to be the earliest major group to inhabit Bhutan. Sharchops translated as “people of the east”

Ngalops are the descendants of Tibetan immigrants who came to Bhutan in 8th and 9th century A.D settling primarily in the west.

The third group is known as Lhotshampas. They represent the Nepali speaking ethnic group. They started migrating in the 19th and 20th century and live in the southern foothills of Bhutan. They are predominantly Hindu.

Predominantly Buddhist, the Bhutanese people practice Drukpa Kargyud sect of Mahayana Buddhism. Monks and nuns play an important role in the daily lives of Bhutanese people. They perform ceremonies by preserving the ancient culture and promote the teachings of wisdom and compassion.   You can practically see every Bhutanese home with a room called ‘choeshum’ for daily religious practice.The faith of Bhutanese can be measured by the temples, monasteries and stupas built in every corner of the country for their daily worship.

Bhutanese food mainly consists of meat, rice and vegetables. People in Bhutan love chilies. The most popular dish in Bhutan is called ‘Ema Datse’ which is made from cheese and chilies.

Chang, a local beer made from rice is a common drink especially in the villages.

The folk dances, ancient music and the mask dances during the religious festivals called Tshechu are some of the unique and distinct cultural identity Bhutan has preserved over the years.